Passer au contenu
JUNE 2022 - PROCESSING PAYMENTS WITHIN 2 days. Contact Email justin.c.doyle@gmail.com
Canada has an international reputation for progressive health policies, take for example its publicly funded healthcare program and its assisted dying laws. It also led the way in drug reform when it became the first G7 country to legalize cannabis in 2018.
But in the face of a worldwide pandemic, a national overdose crisis, and mounting evidence to show that greater access to both psychedelic and other restricted drugs could have positive public health outcomes, it’s fair to say some of the country’s regulations around restricted substances are outdated.
Now, as a handful of patients and more recently doctors and therapists have been granted exemptions to use psilocybin, the nation’s federal health agency is considering making changes to existing policies that could open the door to much more than magic mushrooms.
In 2020, a handful of firms including non-profit organizations and publicly traded companies have worked with Health Canada to encourage greater access to psilocybin and other psychedelic therapies. While one has gone the route of using existing legislation to help individuals apply for exemptions, another is encouraging policy changes that would allow doctors to seek access to restricted drugs for their patients.

‘The Unknown Of What Can Happen After You Die Doesn’t Feel So Unknown To Me Anymore’
One of the earliest studies to come out of the so-called psychedelic renaissance was conducted at Johns Hopkins University in 2016, and sought to examine how psilocybin would affect depression and anxiety in patients suffering from life-threatening cancers. It found that just a single dose of psilocybin left subjects with longstanding relief, with 78% experiencing lower rates of depression and 83% experiencing lower rates of anxiety six months after receiving the treatment.
When Thomas Hartle, a 52-year-old Saskatoon resident with stage four colon cancer read the results of the study, he says he “felt like they were too good to be true.”
“But when you suffer from anxiety, you really look for whatever sources of relief you can get,” he says. Hartle enlisted the help of TheraPsil, a non-profit organization based in Victoria, B.C., to try and access psilocybin therapy for himself. Using a subsection of the Controlled Drugs and Substances Act that allows the health minister to grant an exemption for medical or scientific purposes, TheraPsil has so far assisted dozens of Canadians, including terminally ill and clinically depressed patients, as well as doctors and therapists, in the application process.

In August 2020, Health Minister Patty Hajdu granted the first exemptions to four Canadians suffering from end-of-life anxiety. One of them was Hartle.
The father, husband, and IT technician says his anxiety is “specialized to the existential kind and doesn’t extend to public speaking,” so he’s more than happy to share his experiences with psilocybin. Before his first treatment, he prepared extensively with a therapist, and has since undergone a subsequent session. Without hesitation, he says the experiences have changed his perspective on death and dying.
“What it’s changed the most for me, is that the unknown of what can happen after you die doesn’t feel so unknown to me anymore. Most of how we define ourselves is our experiences and memories and things like that. In the psilocybin experience, my consciousness existed in ways that had absolutely nothing to do with anything in this life,” he says.
“To exist in another state that has nothing to do with my identity here, and to feel comfortable and serene in that state tells me that it’s possible to have some sort of continuation of consciousness that goes beyond our experience here.”
Hartle adds he feels more empathy towards other people since his initial treatment, and says his family has noticed he uses more emotional words in his speech. As a naturally analytical thinker, he says he’s also welcomed a shift to a more creative mindset.

Beyond the positive mental benefits he’s experienced, Hartle says psilocybin also helps to relieve pain associated with migraines, which he’s suffered from since he was a child. “When I compare it to most of the other treatments that I have gone through over the last few years, psilocybin is like the opposite of side effects,” he says, laughing.
Doctors Can Access Psilocybin, Too
Dr. Emma Hapke is TheraPsil’s co-chair of research and one of 16 doctors, nurses, therapists and social workers recently granted exemptions to take psilocybin in preparation for work with patients. She is part of a committee at TheraPsil developing a training program for psychedelic assisted psychotherapy, which she hopes to kick off in 2021.
“We feel that it’s essential that therapists themselves have their own experiences in a non-ordinary state of consciousness, to be on the receiving end of that type of therapy so they can then guide others to do the same,” she says.

She emphasizes that while psychedelic substances have been shown to provide benefit for people suffering from an array of mental health conditions, it’s imperative that any psychedelic experience be paired with therapy for maximum and longstanding relief.
“The molecule in and of itself isn’t what’s healing—it’s the whole package of being in a healing relationship with a therapist and going into the non-ordinary state with psilocybin to access different parts of the psyche,” she says. “If the experience is not integrated, it’s hard for it to lead to lasting change, and so it’s really important that we’re not just talking about a psychedelic. We’re talking about psychedelic-assisted therapy.”

Spencer Hawkswell, TheraPsil’s CEO, says before August 4, seeking exemptions for terminally ill patients felt like an uphill battle. Today the mood has changed, and there is a greater sense of optimism among his team.
“I never thought I’d say that it was easy, or that Health Canada has been incredibly cooperative,” he says. “These [patients] are empowered Canadians, and we do have rights and systems that work for them. Just to have that affirmation is pretty amazing.”
Recognizing the utilitarian nature of Canada’s approach to mental healthcare and drug policy, Hawkswell says that while the current system tries to meet the needs of most, it falls short. “What TheraPsil is doing is showing that there are options beyond the current policy regulations and the norm of healthcare in Canada.”

Numinus Advocates For Special Access Program Reform
Health Canada’s Special Access Program (SAP) allows healthcare professionals to request restricted or otherwise unavailable drugs for patients who have tried existing treatments and found them to be unsuccessful. In theory, the SAP should allow doctors to request access to drugs like psilocybin, MDMA, and LSD. That changed in 2013, when under Conservative Prime Minister Stephen Harper, accessing restricted drugs through the SAP was prohibited. Since then, the only way for patients to access such substances is through clinical trials. 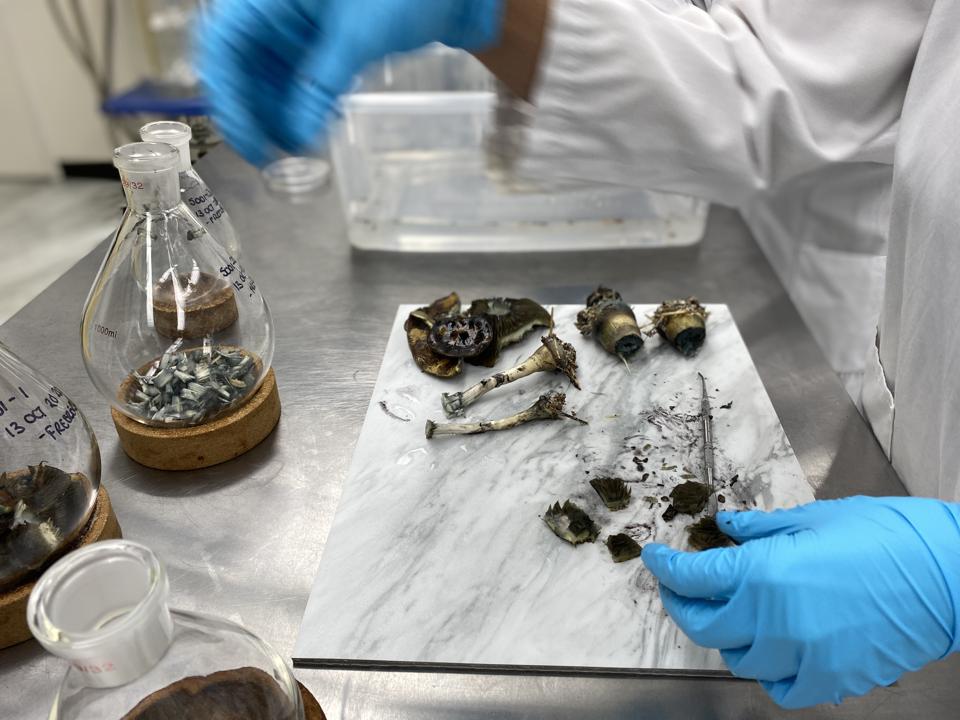 COURTESY PHOTO
On December 12, Health Canada announced its intention to reverse the regulatory changes made in 2013, and initiated a 60-day comment period seeking public feedback. Dr. Evan Wood, chief medical officer at Numinus, has been advocating for changes to the program since early 2019.
Wood says by amending the SAP provision on restricted drugs, Health Canada will better align itself with the Helsinki Declaration, a set of international ethical guidelines that suggest (among other things) if a patient accesses a restricted drug through a clinical trial and finds it to be beneficial, they should be entitled to receive ongoing therapy. Currently, if a Canadian were to access a psychedelic substance or another restricted drug though a clinical trial, even with the support of a physician, they would not be able to continue to access it.
“In my view, it’s really just about stigma and the cultural baggage associated with these molecules,” Wood says. “This is bringing Canada in compliance with those international ethical guidelines, and kicking the door open a crack for Canada to be a real world leader in this area.”
While Wood acknowledges that the Covid-19 pandemic has rightfully taken the majority of Health Canada’s attention in 2020, he’s glad to see that psychedelic-assisted psychotherapy has risen to an area of needed focus, and gives full credit to the agency for proposing the regulatory reversal.
If the change to the SAP is made, Wood says access to novel psychedelic treatment has the potential to increase significantly, as interested patients would simply need to find a doctor willing to apply for access to the drug on their behalf. Applications would then be judged on an individual basis, but would be less arduous than applying for an individual Section 56 exemption, and perhaps even eliminate the need for that process entirely.
For companies like Numinus, Wood says the changes would enable them to better establish the physical infrastructure of their businesses, to train staff, and “to do all of the things that are necessary to do this kind of work safely.”
“When you put the known risks alongside the known safety of these substances, it’s a bit of a no brainer,” he says. “It's not going to be a cure for everybody, but even to be talking about a ‘cure’ in the context of mental health challenges is a total paradigm shift.”
Some might argue that decriminalization is the obvious next step, however Health Canada isn’t alluding to that just yet. In an email, a spokesperson for Minister Hajdu said the agency “thoroughly reviews all requests for exemption and makes decisions after taking into account the risks and benefits.”
“We still have much to learn about the risks, which is why the sale and possession of psilocybin is still illegal. Until there is a sufficient evidence base, Health Canada will review each request for an exemption on a case-by-case basis.”
ORI|GINAL ARTICLE FOUND HERE
Partager Partager sur Facebook Tweeter Tweeter sur Twitter Épingler Épingler sur Pinterest
Retour à News